So with this deck a few things aligned for it to be selected. First, it got second place losing to the Tarot of the Hours by one vote. Second, Netflix released the new Sailor Moon movie (yes I am an anime fan -M). Third, with it being Pride Month I wanted to use a deck that has everyone’s favorite fictional “Cousins”. One thing about the deck, it only has the major arcana and some characters are on multiple cards so reading it is a bit harder in my opinion but each character has their own aspects to add to the reading.

The spread uses six cards in the shape of a heart. The top card is how you view yourself, while the cards under it help break apart issues, used to improve, or build upon what you already have. 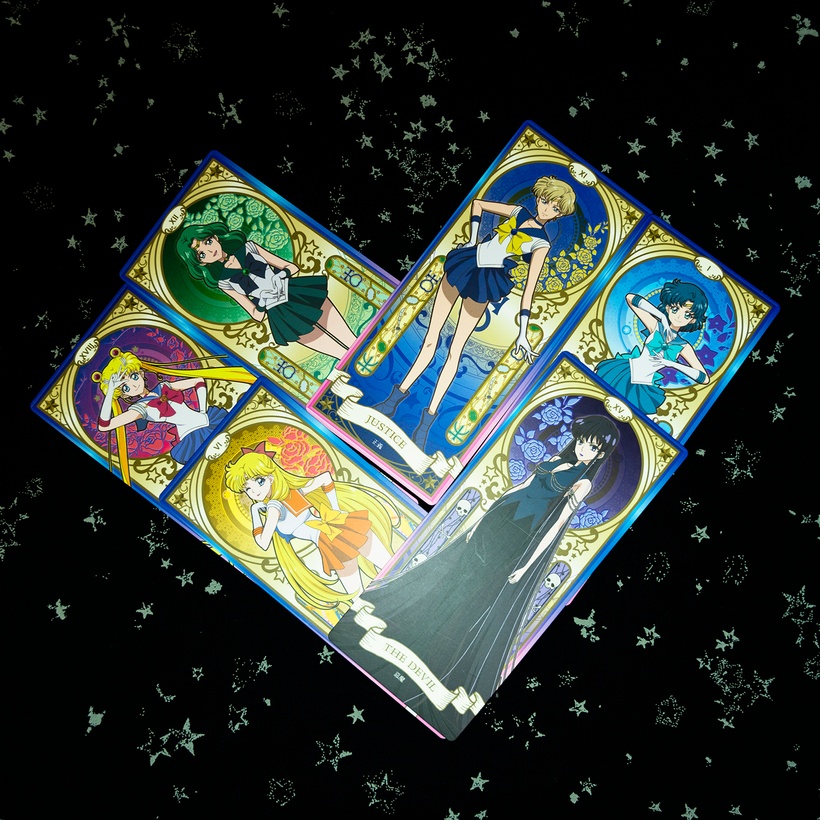 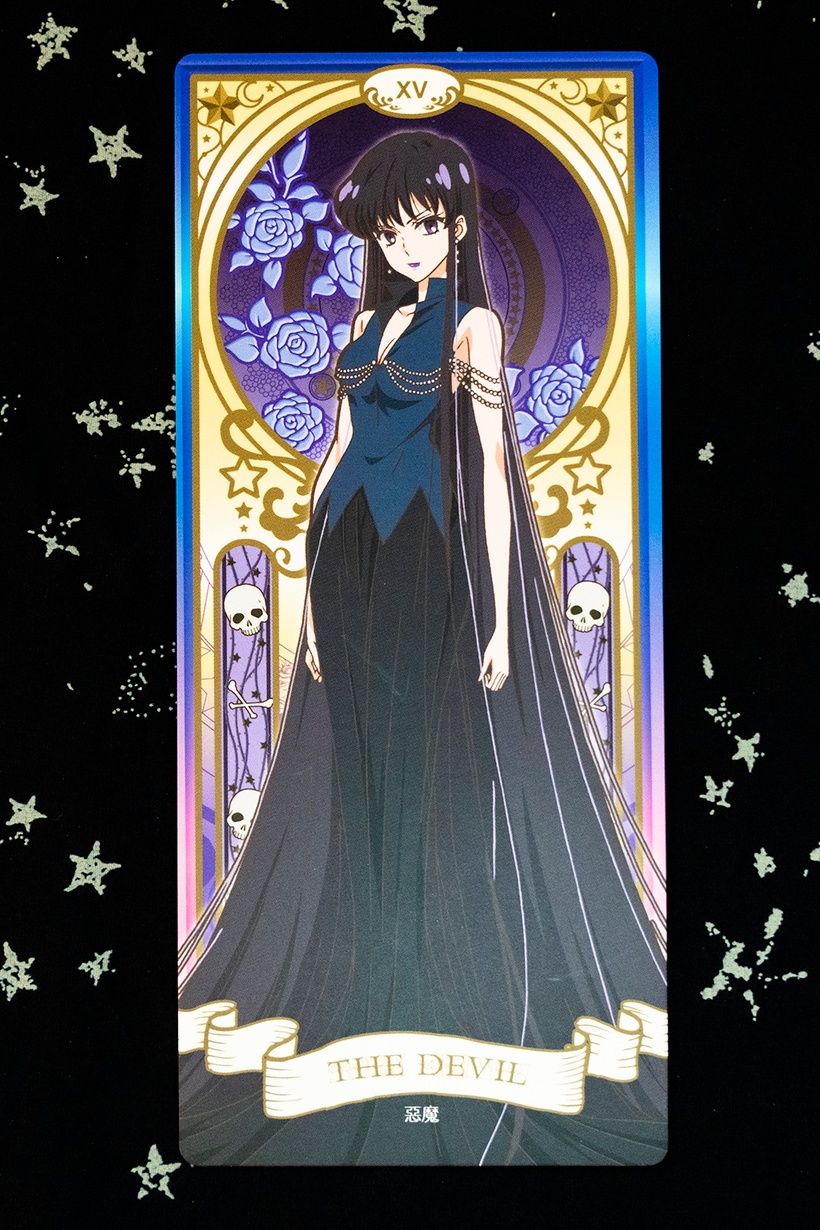 Mistress 9 starts this spread representing The Devil. In the anime, Mistress 9 is a malevolent entity that took hold of Hotaru’s body leading her to evil. In the anime Hotaru overcomes Mistress 9 casting her out destroying her in the process and becoming Sailor Saturn the Soldier of Ruin and Rebirth.

In the first position this card represents darkness within you that you need to overcome. Mistress 9 was a foe within Hotaru and by overcoming it she was able to become something greater. With this look at what is causing you to doubt yourself or drag you down. See if this is from internal or external forces. 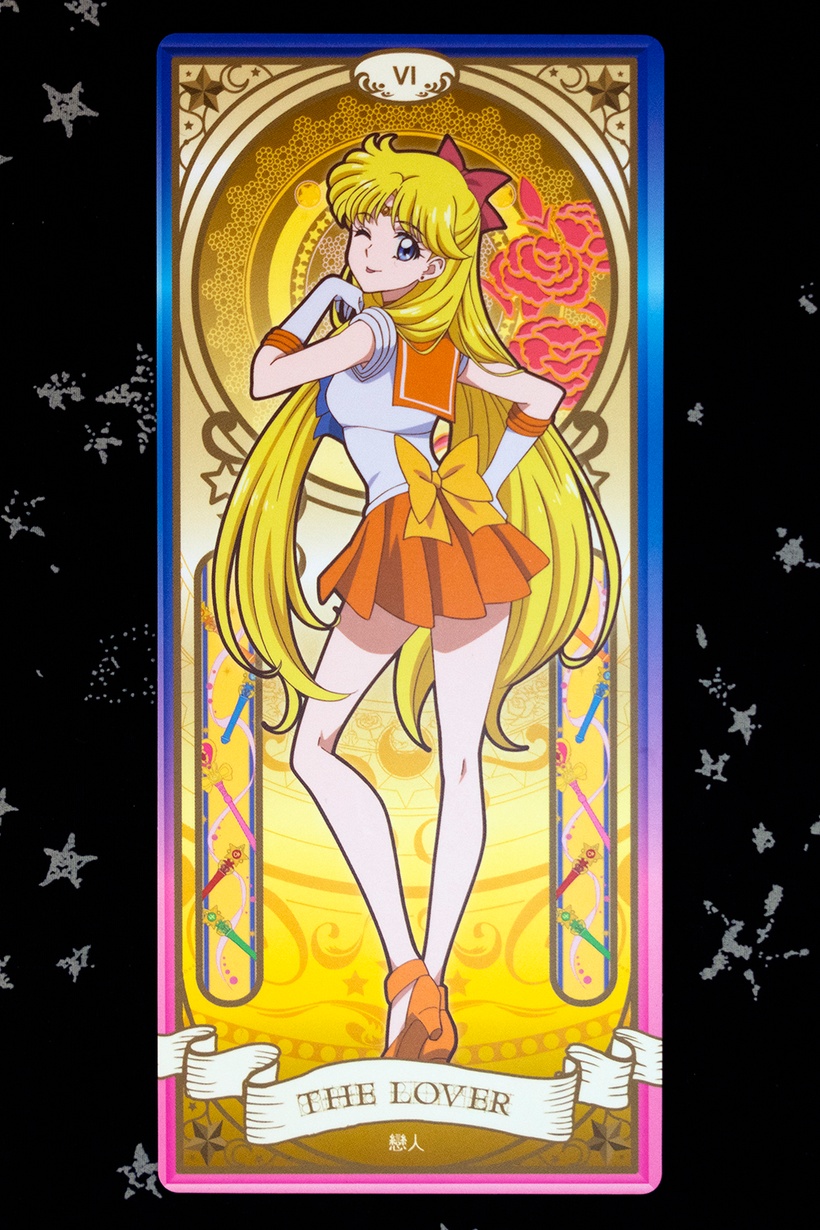 Sailor Venus the Soldier of Love would of course be associated with The Lover(s)*. Being the first card that is being hidden by Mistress 9 it also helps show that love is a great gift to have. It is said before you can love others you have to love yourself. This can be hard and often we end up with our hearts focused on other things or people.

Minako with so many connections to love being directly under The Devil/Mistress 9 card shows just how hard that can be to love and accept who you are. Instead of focusing on what you do not like about yourself, find what you do like and share that part with others to help it grow.

Sailor Mercury the Soldier of Intelligence is The Magician of the inner senshi. She is smart and dedicated to her studies but feels the need for approval at times. This is similar in a way when you look at the standard interpretation of The Magician of one who has abilities but can end up stuck or blinded by their own power or fear of failure.

Ami is the second card under Mistress 9. With this the first thing to take stock on is do you need approval for the things you do. Yes we all like being told what we do is good, but if you are doing something just to be liked that is not worth spending your energy on. 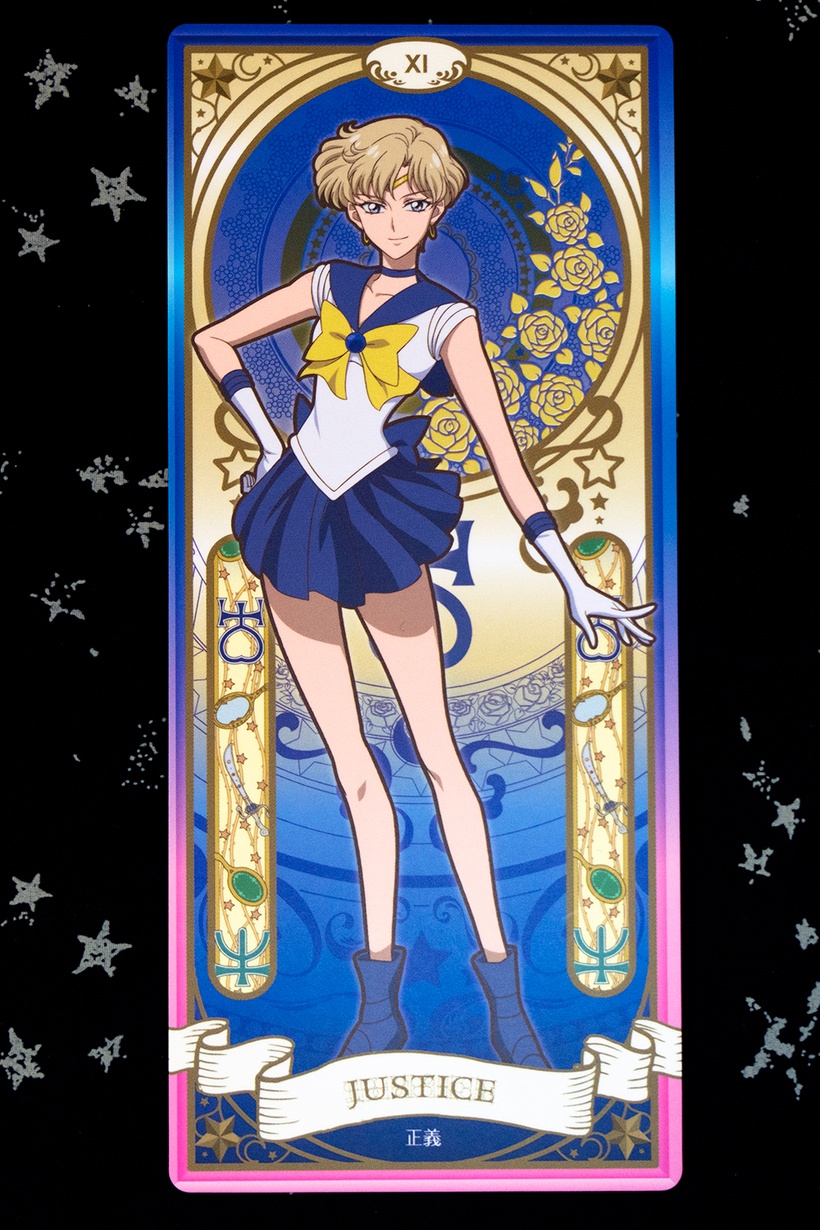 Sailor Uranus the Soldier of the Sky can be stubborn, protective and strong-willed. As the aspect of Justice she stands as a force of balance. Justice is not meant to be swayed one way or another but to find balance in things. The statue of justice is a blind woman holding scales to show this fact that yes justice is blind but should be balanced in the end.

With Haruka it shows the need to find balance with yourself, but it does not mean you have to do it alone. Standing on her side in the spread is her partner/lover (or cousin in the original English dub *shutters*) Michiru. With how these two cards are together I read them as a pair (as they should be). Before going on though the balance is shown with how the two are a couple, Harurka is the more mascluine of the pair compared to Michiru*.

*Note -Naoko Takeuchi the creator of Sailor Moon has said, “that a feminine person and a masculine person would be attracted to each other even if they’re both girls.” 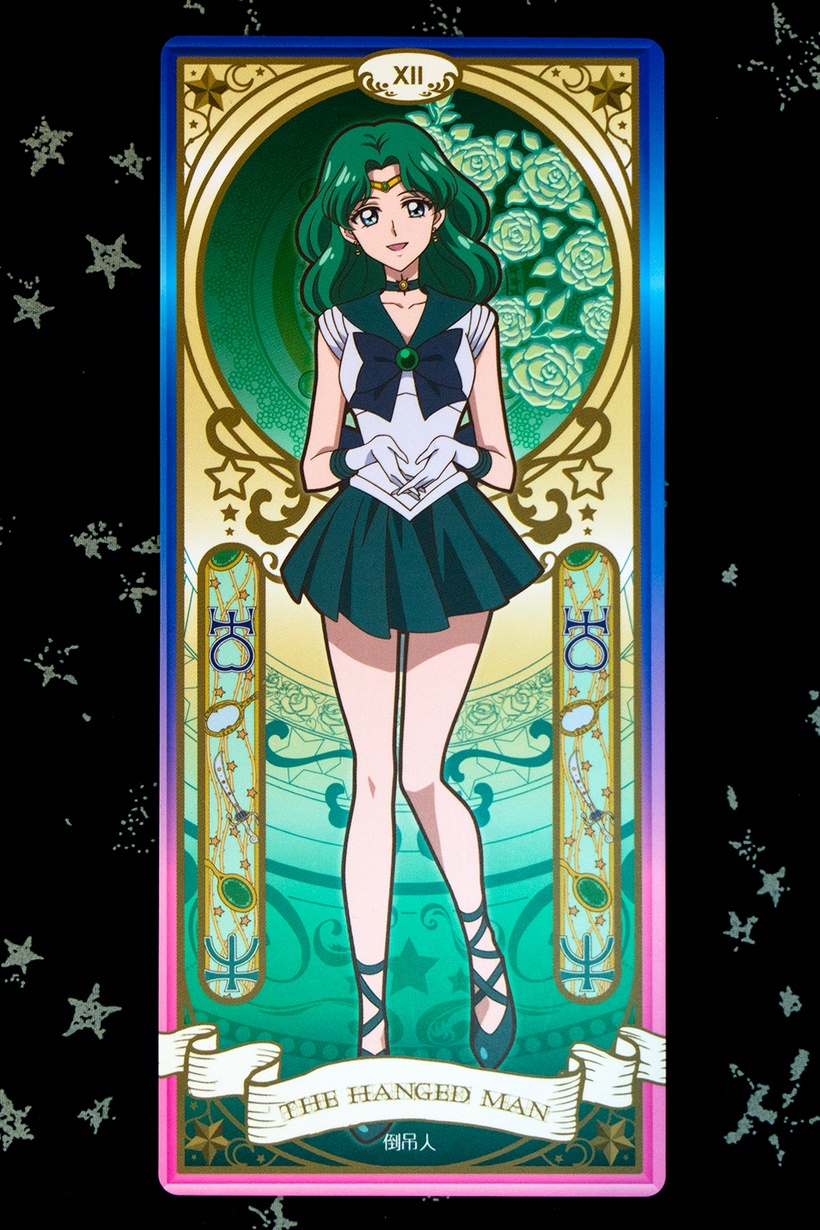 Sailor Neptune the Soldier of Comprehension. Michiru is elegant, sophisticated but also capable of sharp anger and can come off as cold. With her being representing the Hanged Man it leads back into her being the Soldier of Comprehension. The Hanged Man is usually a time to take a look at things and comprehend what is really going on. At times when we meditate too much on ourselves it will cause us to come off as cold to those around.

But touching on the last card we have her partner Haruka that helps add balance to this self mediation. The two together can act as one concept to help you find balance but also this can mean letting others who know you help you understand things that you might not see because even looking into ourselves we can be blinded by our own prejudices or ignorance of who we are.

So be willing to during your own look at yourself to ask others to help. You do not have to be alone to find yourself but you should be careful who you are willing to be completely honest with. 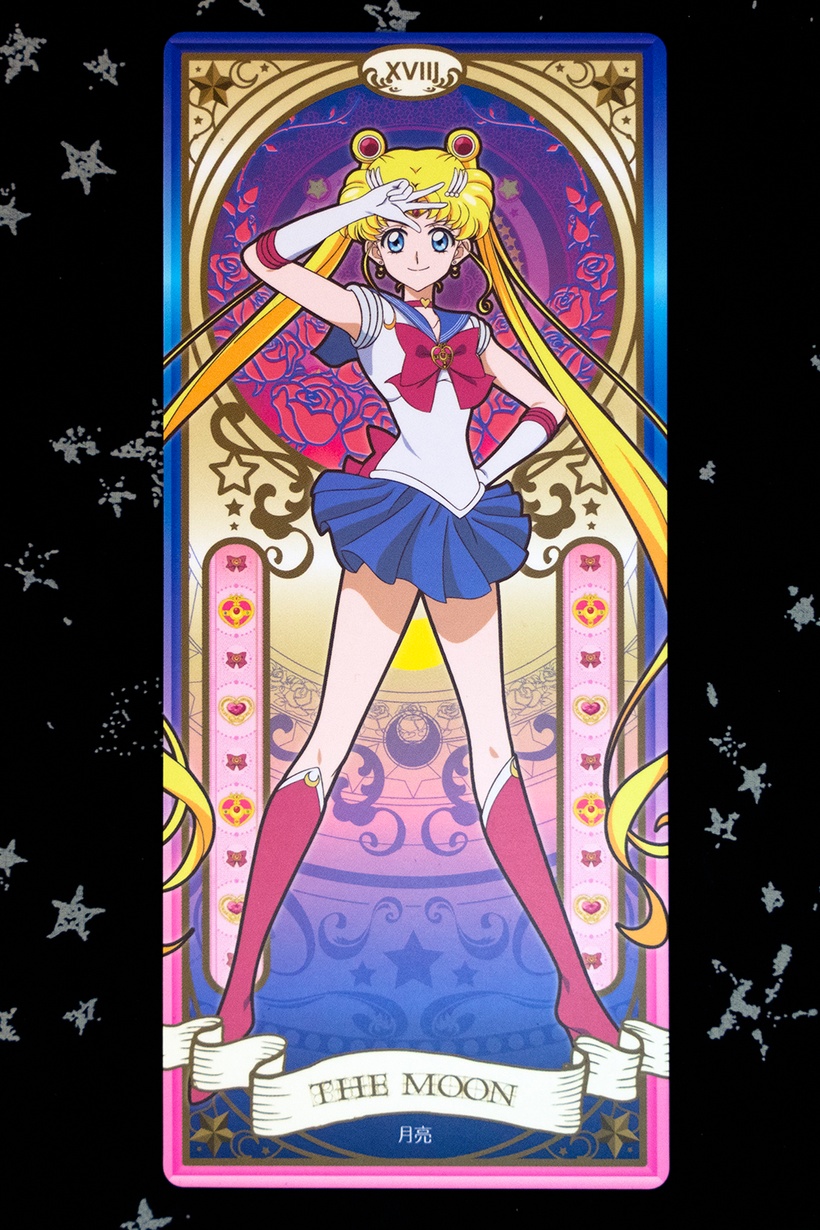 Sailor Moon the Soldier of Love and Justice is the main character in the anime. The Moon in most tarot decks has a different read than I would use in this one. Because for thematics The Moon of course will be represented by Sailor Moon. With that I am using the character and her aspects more in this reading. Moving along.

At the start Usagi is seen as lazy, selfish and poor in academics, just like everyone she has her faults. Looking beyond that is where she shines as being carning, loving and a true friend to those around her. Before her we already had Love with Minako and Justice with Haruku but her aspects of this are for those around her, she fights for those she cares for more than just herself.

In this spread look at this as find people or ideas around you who you are willing to fight for. If you do not have something you find value enough to do this for now is a time to do so. We have gone over looking at yourself but at the very end now it is time to use what you have gained to help others. 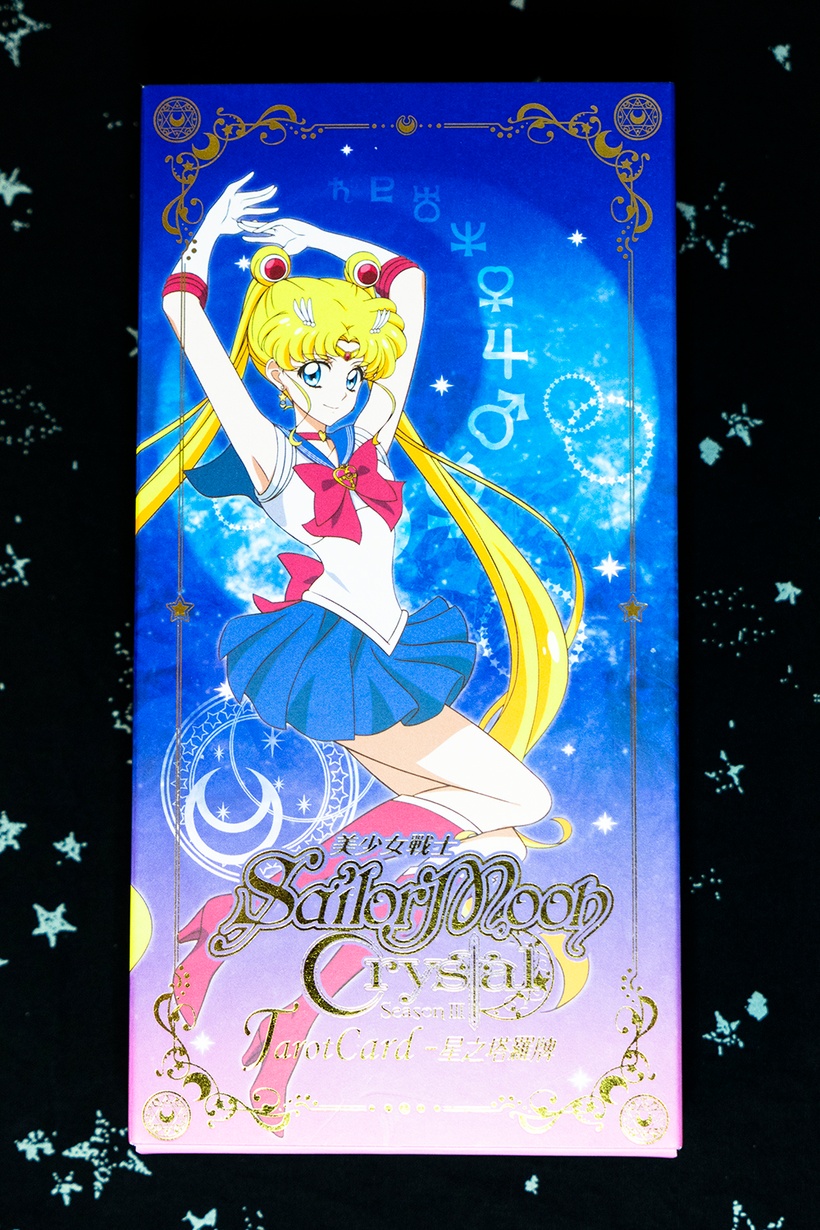 The path to self-love is not easy. As it is seen the hardest part is first with The Devil blocking even starting, but at the end it can no longer be just about self-love but being able to share your love with others in a positive way.

(PS sorry about the lateness of this post I am going to blame Mercury retrograde and leave it at that. -M)